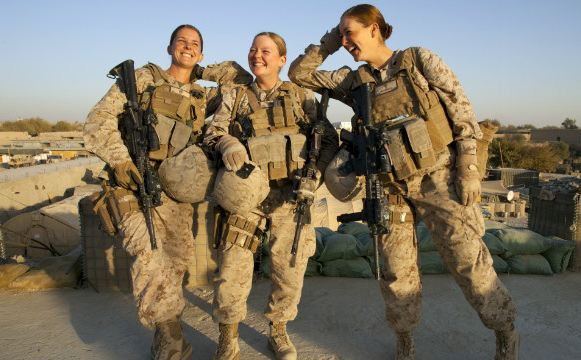 While “women in combat” may be the latest cause célèbre of liberals, what are the chances the majority of them have actually thought the whole thing through? (Pick “zero.”)

Granted, liberals seem to think the U.S. military should serve as some sort of societal 8th-grade science project, but this social experiment might just turn out to be one of those “be careful what you ask for” (or demand, as it were) situations.

Now that the Regime has lifted the military’s ban on women serving in combat, how ’bout we help the loons think it through a bit, shall we?

Let’s start with Selective Service registration. As we well know (as men, or parents of men), when that 18th birthday rolls around, America’s males are required by law to register with Selective Service – whether a draft is currently in force or not. Reason being, the government must be assured of the ready availability of an adequate number of combat-capable bodies at a relative moment’s notice.

So, given that the Regime has declared that women are indeed combat-capable, logic dictates that 18-year old girls should also be required to register, right?

If one were to poll 100 liberal college coeds, what percentage of them do you suppose would be in favor of compulsory Selective Service registration for 18-year old girls? (Pick “zero” again.)

For that matter, how many bleeding-heart liberal parents are in favor of their daughters being eligible for the draft? (Um, still pick “zero.”)

This is not to be confused with the unequal social responsibility given to those of us who can afford to help those in need who cannot help themselves. In this instance, “inequality” is not only appropriate; it is necessary.

It is analogous, however, with the proper assumption that those of us who can help must do so equally (relative to income) without excuse or discrimination based on gender, race or religion.

Does it not follow, then, that since the Regime has deemed women to be fit for combat, all young women who are equally healthy and equally able-bodied should now be required to register for the draft? If not, why not? And, why is this not discriminatory against young men?

Hey, libs – you got your way. And, hey, girls – Uncle Sam may need you to serve your country at some point in the near future – equally, of course.

Gleefully Exposing Liberal Lunacy on a Daily Basis! Mike's favorite target is the liberal "political lie," which he astutely defines as "liberals saying things they know aren't true for the sole purpose of exploiting the 'less than informed' for political gain." Liberal hypocrisy knows no bounds, folks - jump on the Rat train and come along for the fight!

View all of Mike's posts.

About The Conservative Citizen

The Conservative Citizen is an online journal of discerning thought and conservative excellence that presents an array of perspectives on society, politics, public policy, culture, and current events. We espouse the concepts of ordered liberty, free enterprise, conservative principles, and constitutional governance while exposing the hypocrisy and failed policies of the Left.

Calling all writers! Both "amateurs" and professionals. If you would like to see your article posted here, as well as promoted on several very large FB sites, please send us your submission. If you are an established writer please add us to your submission list as well. Constitutionclub@gmail.com

Error: Twitter did not respond. Please wait a few minutes and refresh this page.